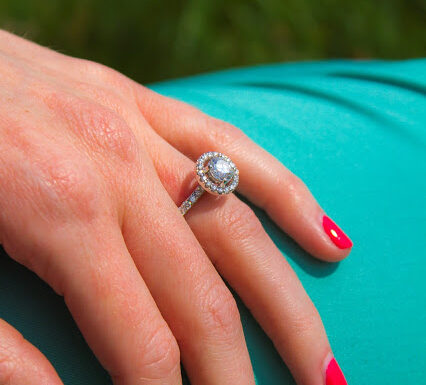 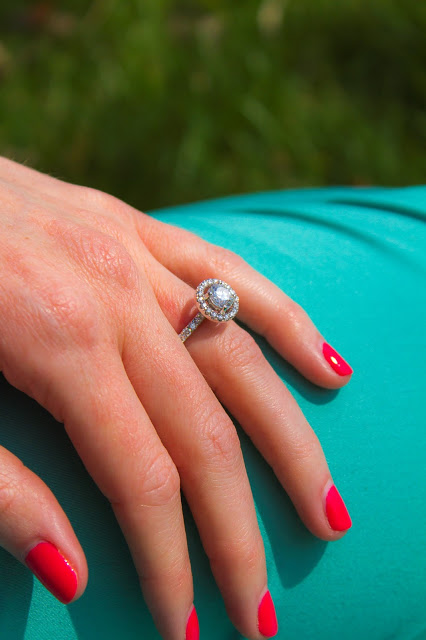 One week ago Eric asked me to marry him! I haven’t stopped smiling since 🙂 It was a Monday night so he took me completely by surprise. He apparently had the ring made a while ago and had wanted to do it several times before but each time something went wrong. He finally decided that the timing would never be perfect and to just do it! He called right after I got off work and asked if I wanted to go to dinner and after a long Monday I agreed. When I got to my apartment he surprised me and showed up with groceries to cook instead. When I realized he was cooking stuffed bell peppers I got really excited because I hadn’t had them in a while. We started talking about the peppers and I remembered that was the first thing I ever cooked for him (of course he already knew this and was part of the plan!). The first time we met was when his roommates brought him along to dinner at my apartment one night in Stillwater when we all lived at The Reserve. My best friend and I cooked stuffed bell peppers for the group and according to Eric he was immediately smitten with me. I obviously felt the same! So when I thought back to when we met I realized it was 2 1/2 years ago. I got excited again because I thought he was celebrating our “anniversary”. He played it off (he had other plans after all) and we sat down to eat. Halfway though the meal Eric announces that he remembered something and got up to get his backpack. Now a side note: for months Eric has been teasing me by pretending to propose. He would get down on one knee, say my name, then proceed to tie his shoe. He thought this was hilarious but after several months I’d started to get annoyed with it. So this night when he bent down to get something out of his backpack I of course froze and my first reaction was THIS IS IT (again…). He then pulled an Eskimo Joe’s cup out of his bag and said “I took this from your kitchen; didn’t want to forget to bring it back!” I huff and puff and toss the cup in the sink as he laughs. But as I sat back down he pulled something else out of his bag. I turn and he’s down on one knee with a ring box in his hand. This took me COMPLETLY by surprise; especially since he JUST tricked me and I let my guard down. The rest was a bit of a blur because I FREAKED out! Laughing, crying, shaking, dancing, squealing, and jumping around. I just remember saying “ARE YOU SERIOUS!? OMG, REALLY!?” over and over. But he asked me to marry him and I said YES! So we’re now engaged and really excited about what our future holds. We were able to go home to Oklahoma this past weekend for Easter and got to see both our families. His brother-in-law even got some pictures of us and the ring. We’ve received so much love and support this week and I can’t begin to say how much we appreciate it. But there have been 1,000 questions asked that we don’t yet know the answer to: “What’s the date?”, “What colors are you using?”, “Who are your attendants?” It’s only been a week so we don’t know yet! But we did have a lot of time on our drive to and from Oklahoma to get a better idea of what we both want. So let the planning begin!